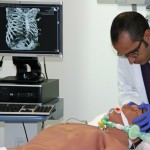 The Simulation Unit at the Hospital Universitario Puerta de Hierro Majadahonda  is hosting several editions of the «First Course on Donation Following Controlled Cardiac Death» throughout the first trimester of 2013. This type of donation, known as Maastricht type III donation, is virtually inexistent in Spain, despite being fairly common in many other countries. The use of clinical simulation makes this course specially attractive, since participants are immersed in simulated clinical scenarios in which they face an «almost real» donor. The Medical Simulator’s iStan mannequin responds perfectly to the changes that may present during the Wisconsin test (used to predict the likelihood of an early death after limiting life-sustaining treatment) or after terminal extubation. The donor’s response to the withdrawal of life support, with the gradual decrease in blood pressure till cardiorrespiratory arrest, allows the analysis of the warm ischemia times used in these protocols, which are vital to assess the viability of transplantable organs. The simulated cases, in which a small number of students is involved, are then discussed among all to analyze the problems encountered and to clear the corresponding doubts. 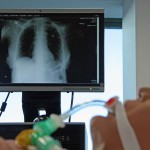